O.J. Simpson Guilty on All 12 Counts 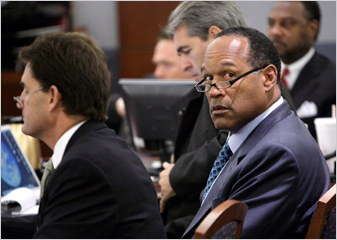 He stood stoic and silent as the verdicts were read.

O.J. Simpson was just found guilt on all 12 counts relating to charges of armed robbery and kidnapping.

As I continue to watch MSNBC, O.J. is now being handcuffed and led from the courtroom.

Wow.  That is an incredible sight.  No slow moving chase.  It all ends in a whimper.

Mr. Simpson faced 12 charges stemming from a September 2007 confrontation in a casino hotel room in which he and five cohorts departed with hundreds of items of sports memorabilia.

The items were in the possession of two memorabilia dealers, Bruce L. Fromong and Alfred Beardsley, who were led to believe a prospective buyer was coming to browse the goods. Instead, Mr. Simpson and his group burst into the room and, according to several witnesses, at least one gun was brandished.

O.J. won’t be hosting any parties for the jurors on this one.

The judge denied all post-verdict motions by Simpson’s attorney.