Home / Rant / Republicans / The Passive Tense is Loved by Me

The Passive Tense is Loved by Me

The Passive Tense is Loved by MeMarch 13, 2007 TL
RantRepublicans
0 Comment 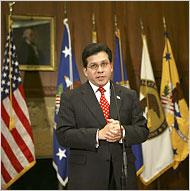 I love the passive tense. I can make any observation I want, and really not take responsibility.

“The car was driven into the lake.”? I could’ve said that years ago when I almost literally drove my car into a lake when I mistook ice fishermen on a frozen lake one night for people camping out.

“People are being killed by second-hand smoke.”? Yes, we’ve heard that before.? Philip Morris is so nice to tell us that in their commercials, and then tell us how much they care about those people, and how much overtime they’re working to make sure fewer people die.

What a way to report on the most outrageous, horrifying experiences! The passive tense softens the blow, draws attention away from the caustic. Soon, the screams of the soldiers dying are hardly being heard, uh, by us. The blast of countless explosions in the midst of war are ignored, by us. And justice is denied, by us.

Attorney General Alberto R. Gonzales took the cake today, “under criticism from lawmakers of both parties for the dismissals of federal prosecutors, insisted Tuesday that he would not resign, but said, ‘I acknowledge that mistakes were made here.'”

“Mistakes were made here,” the New York Times reported.

What a colossal understatement. He refused to resign, or to take further responsibility. Time to pass the buck. After all, Gonzales isn’t going to take the fall for Karl Rove.

“The White House did not play a role in the list of the seven U.S. attorneys,” said Dan Bartlett, describing President Bush’s role in the active voice.

You see, we can say with great authority that the President did nothing, was completely inactive in this matter. However, we can only nebulously assert that “mistakes were made” by someone, or perhaps a group of people. We’re not quite sure about that yet.

On Tuesday afternoon, at a press conference in an ornate chamber adjacent to his office, Mr. Gonzales pledged to “find out what went wrong here,” even as he insisted he had no direct knowledge of how his staff had made the firing decisions. He said he had rejected an earlier idea, which the White House said was put forth by Ms. Miers, that all 93 of the attorneys, the top federal prosecutors in their regions, be replaced.

“Find out what went wrong here.” We can do that eventually. Something went wrong, and, dammit, we’re going to get to the bottom of what went wrong by someone. And we have to be concerned about King George II:

But inside the White House, aides to the president, including Mr. Rove and Joshua B. Bolten, the chief of staff, were said to be increasingly concerned that the controversy could damage Mr. Bush.

“They’re taking it seriously,” said the other of the two Republicans who spoke about the White House’s relationship with Mr. Gonzales. “I think Rove and Bolten believe there is the potential for erosion of the president’s credibility on this issue.”

We will get to the bottom of this, mind you.

What went wrong will be discovered by us. Leave your name and email address if you want to know how this ends.

You will be gotten back to on that by us.